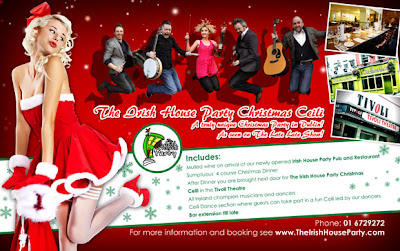 This is your chance to join The Irish House Party for their Christmas spectacular, the 4 FREE tickets include a sit down Christmas dinner in the tastefully decorated Irish House Party pub and restaurant at 19 Francis Street Dublin, followed by a short walk across the street to the fantastic Tivoli Theatre where you will enjoy the greatest traditional Irish session ever. When you have been blown away by the music and the crack in the Tivoli you can return to the Irish House Party bar to enjoy the music of good old fashioned foot stamping pub session with Ireland’s greatest musicians, singers and dancers. This is a session you won’t want to leave and a traditional Christmas you will not forget.

Snow White and the Adventures of Sammy Sausages BOOK DIRECT

“Fantastic” “What a treat for the family” “Better than ever expected” “Mammy can we come back again”……
Just some of the parting comments of last year’s visitors to The Tivoli Theatre Snow White Panto last year, and no matter how mature we get, we still get a real buzz out of the traditional Christmas Panto at The Tivoli Theatre…..so much has changed in our world……yet the one constant is our Christmas traditions…..thanks to The Tivoli Theatre the next generation can carry on the annual pilgrimage to worship theatrical Gods such as Sammy Sausages AKA Alan Hughes and Goddesses such as the world famous Niamh Kavanagh as the Good Queen.
After his fantastic performance in Snow White last year, Alan Hughes returns to The Tivoli Theatre, Dublin, as the lovable Sammy Sausages ... Whatever you do, don't miss this fun-packed Tivoli family pantomime 2012.
One might ask if there is no end to the talent and vision of those associated with The Tivoli Theatre as only a couple of weeks ago The Tivoli teamed up with The Irish House Party to bring a new dynamic to the world of traditional Irish music and dancing.
This year’s Christmas Panto at The Tivoli Theatre is already being billed as the best show in town by those who love theatre and the annual serving of all that is great about the traditional Christmas Panto in Dublin. Starring Alan Hughes as the lovable Sammy Sausages, Brian Dowling as Bridie the Mirror, Niamh Kavanagh as the Good Queen and Niall Sheehy, finalist in ITV’s Superstar, this is one Panto not to be missed!
12 December 2012 – 12 January 2013
TICKETS: €21.50 (Preview) / €100 for Family Ticket (2 x Adults & 2 x Children) / €29.50 Adults & Children
BOXOFFICE: 01 454 4472 (No Booking Fees Apply)
Limited number of Family Tickets available per performance
Book Online Now
The Tivoli Theatre, 135-138 Francis Street, Dublin 8, Ireland.
Telephone: +353 (1) 454 4472/Email: info@tivoli.ie